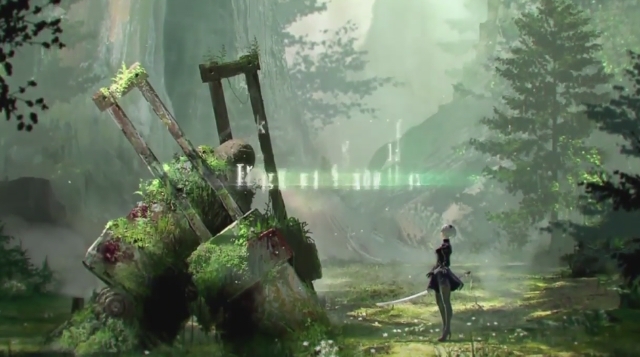 Extraterrestrials suddenly invaded. Deploying the “LIving Machines” that they created, mankind left to the moon after being overwhelmed by their force.

In no man’s battlefield, the intense fight between the Living Machines and androids
Klicken um auszuklappen...
Zuletzt editiert: 3. Dezember 2016

This is one hell of a dream team
Klicken um auszuklappen...
Apropos Musik
[ame]https://www.youtube.com/watch?v=6gilH6f2hHk[/ame]

Is the world of this game tied to that of the previous game?

Yoko: “The setting is connected, but that doesn’t mean the story is connected. This game is set in the future, so it’s okay if you start with this game. Rather, people who played the previous game and come into this thinking it’s a sequel might be confused.”

Will characters from the previous game appear?

Yoko: “Not everyone, but some characters will appear. But not as core characters.”

What will the game’s CERO rating be?

Yoko: “We made the previous game with the intention of a B or C rating, but got a D. We’re making this one in hopes of getting an A, but…”

Weapon-based action is at the game’s core. There might also be some familiar shooting.
There’s a rotational element (360-degree camera view?), but it’s apparently different from the previous game.
Drakengard‘s familiar “Weapon Story” system will be in the game.
Development is 10 percent complete.

"For this new Nier, we kept an action RPG mindset and thought, this time we want to hit out a great, high-level JRPG, so we're going to stick to one character design," Saito added.

"Platinum is great at creating action games, and we've asked them to make things a little more simplified, slightly. At first I thought it was going to be a battle-heavy action game, but luckily for us, a lot of Platinum Games' staff members really respect Nier and took it to heart, and understand the project.

"We're really fortunate in that they essentially took the battle system and the game design of the original Nier and added Platinum Games-type elements on top of it to make this hybrid if you will. It's not like it's a completely new game, they really have respect for the previous game."
"Drakengard was my first game as director, and we were actually told a lot by our advisory board to do retakes and make changes and honestly, I said, screw this, I'm not making another one," Taro said.

"I thought, with Nier, I'm going to make a normal game. That's what I tried to make, a normal game, though people think it's very dark and somber. But for me, that's normal."

He added: "The way I look at original Nier is like your mom's home cooking: it may not be the best, but it's okay, you're comfortable with it. Members of the media told me the original Nier is like a puppy someone threw out. It's cute in a way, but there's something wrong in a sense, and you can't help but love it even though there's something missing and you can't put your finger on it.

"But now we're working with Platinum games, and with Yoshida and Okabe, and we feel we have these great ingredients now. Is it going to be too perfect? We have all these great chefs, if you will, working together, and now, is it going to be missing that thing that made it so endearing to our fans? But after thinking about it, we think, we're just going to try it and see how it goes."
Klicken um auszuklappen...
Zuletzt editiert: 17. Juni 2015