June 11, 2017 (Rockville, MD) – Bethesda Softworks®, a ZeniMax® Media company revealed that Wolfenstein® II: The New Colossus™ , the highly anticipated sequel to the critically acclaimed first-person shooter Wolfenstein®: The New Order, is slated for release worldwide on October 27, 2017 for Xbox One, PlayStation® 4 computer entertainment system, and PC. Developed by the award-winning team at MachineGames ™, Wolfenstein II: The New Colossus sends you to Nazi-controlled America where you’ll embark on an exhilarating adventure to free the world from the evil empire’s stranglehold.

You are BJ Blazkowicz, aka “Terror-Billy,” member of the Resistance, scourge of the Nazi empire, and humanity’s last hope for liberty. A heart-pounding journey brought to life by the industry-leading id Tech® 6, Wolfenstein II: The New Colossus sends you on a mission to recruit the boldest Resistance leaders left. Fight back against the Nazis in iconic locations such as small-town Roswell, New Mexico, the flooded streets of New Orleans, and a post-nuclear Manhattan. Equip an arsenal of badass guns, and unleash new abilities to blast your way through legions of advanced Nazi soldiers, cyborgs, and über soldiers in this definitive first-person shooter. Only you have the guts, guns, and gumption to return stateside, kill every Nazi in sight, and spark the second American Revolution.

On October 27, Bethesda will also release the Wolfenstein II: The New Colossus Collector's Edition , which includes a 1/6 scale 12-inch action figure of the game's Nazi-killin' hero William Joseph "BJ" Blazkowicz, packaged in a premium, 1960s-style box. BJ comes fully equipped to rally the Resistance and free America, with an arsenal of accessories including four high-powered guns, a hatchet, and his bomber jacket. Available through participating retailers across the globe, this limited Collector's Edition also includes the eagerly awaited game inside an exclusive metal case, and a 9"x14" Blitzmensch poster. Fans are encouraged to check with preferred retailers for pre-order incentives and additional special edition offerings.
Klicken um auszuklappen...
http://www.gamasutra.com/view/press...USTM_SET_FOR_GLOBAL_LAUNCHOCTOBER_27_2017.php 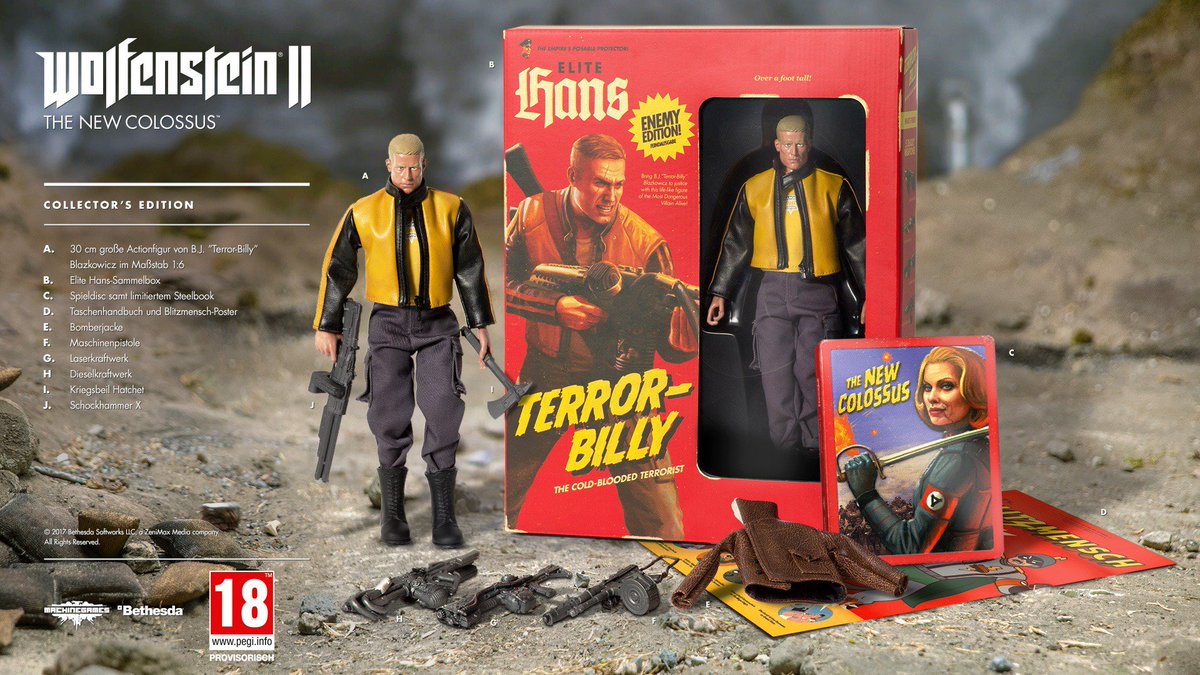 down the rabbit hole